Summary: I argue that we’d be better off if we had more and more efficient price discrimination, and suggest a simple scheme the IRS could use to enable it. This probably isn’t a good idea. Also, I just learned that Buck proposed exactly the same thing 2 months ago, I guess something is in the air but I’m not sure what.

If it costs me $2 to make a pill, and someone isn’t willing to pay $2 (e.g. because they don’t want it at all), then I shouldn’t give them the pill. If they are willing to pay $2, then it would be socially efficient to give it to them, and the only question is what the price should be.

Different potential customers are willing to pay different amounts for my product. We might summarize the situation with a graph: on the x axis are people, on the y axis are prices, and the blue curve represents willingness to pay, the highest markup at which the customer would be willing to buy my product. 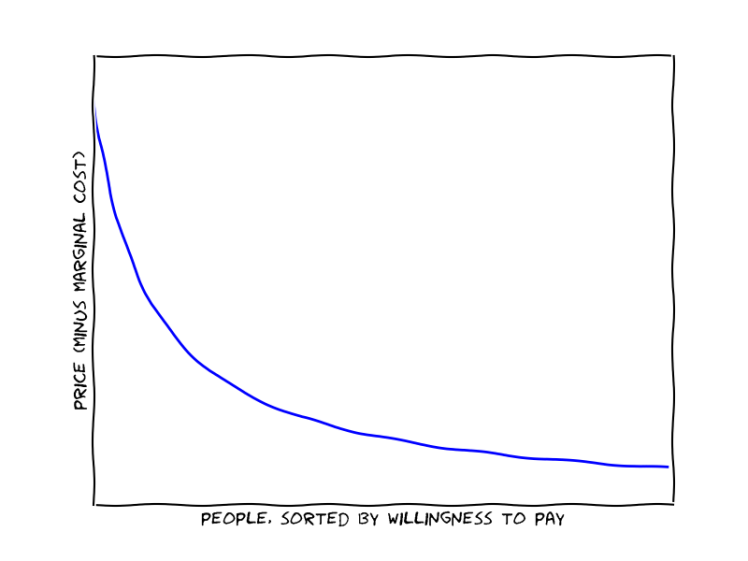 If I charge more money, I will get fewer customers but make more per customer. If I want to pick the single price that maximizes profit, I’m basically trying to inscribe the rectangle of maximal area under this graph:

Where the markup I’m charging is the height of the green rectangle.

There are two problems with this situation: first, a bunch of people aren’t getting the product even though it would be socially efficient (that’s the deadweight loss). From a distributional perspective this is especially annoying because those people will tend to have less money to start with. Second, I’m not getting paid enough for producing the product (that’s the consumer surplus), and so it will tend to get underproduced.

You may not be used to seeing the consumer surplus described as a “problem,” but that’s the kind of guy I am. (Also: this is the discussion for a single seller, if we step back to consider the entire market then the whole point is to generate surplus.)

I would really like to charge higher prices to the people who are willing to pay a lot, and lower prices to the people who aren’t willing to pay a lot; this is called “price discrimination.” It potentially fixes the problem with some people not getting the product even though they should, and it also means that the compensation for making a product is closer to the social value it creates.

You can’t directly observe how much a customer is willing to pay, but you can try to effectively charge different prices for different groups anyway. For example:

All of these measures potentially increase efficiency by facilitating price discrimination. They also directly lower efficiency, by placing artificial restrictions or imposing artificial costs on customers.

A wide variety of factors determine someone’s willingness to pay for a product. But one extremely important and nearly universal factor is how much money they have. One of the purest forms of price discrimination is to charge a lower price to poorer customers.

Wealth-based price discrimination is often implemented by making discounts available to customers who pay non-monetary costs that wealthy people wouldn’t pay (since they don’t care as much about the discount). These measures don’t seem super effective, and as an added drawback they impose random and socially unnecessary costs on low-income families.

As it turns out, the government already monitors how much money everyone makes. So here’s a possibly-more-efficient alternative:

I expect this proposal to seem objectionable to lots of people, but as far as I can tell it would significantly increase efficiency and have positive distributional effects–at least if we ignore the costs of implementing it.

This proposal would reduce prices for poor consumers and increase prices for rich consumers.  As a society we already pay costs to take money from rich consumers and give it to poor consumers, so we should be happy to get some extra redistribution in for free. Moreover, this proposal doesn’t involve any expansion of the government, is economically efficient, and is good for business, so this should be an unusually palatable form of redistribution to people on the right.

If adopted widely, it would also increase the effective marginal tax rate on everyone (since earning more money forces you to pay higher prices). But as far as I can tell, this is an unavoidable artifact of any form of redistribution, so this scheme isn’t making the negative incentives per unit of redistribution any worse.

In aggregate this scheme transfers value from consumers to producers. For the most part I think that’s not a big deal–most of the benefits eventually flow back to consumers in the form of wages, returns on capital, and more goods being produced. It does potentially have upwards-redistributive effects, if high-income workers and capital-holders are involved in more production relative to consumption. But these effects seem to be more-than-cancelled out by increased prices for high-income workers and capital-holders.

The actual implementation would probably not be by showing certificates to sellers. I imagine that people like credit card providers or PayPal would offer special accounts; they would check your income, and then would certify it to sellers during the payment processes. Or you might use a certificate to prove eligibility for a special Amazon account. Or discounts would be claimed as rebates. I’m not sure. This could all be built by the private sector after the fact.

Sellers would hopefully not be involved in directly setting prices. Instead this information could be used by services like Freshplum, who are essentially charged with setting prices in order to maximize income, using whatever information they can find. Ideally, from the seller’s perspective this would be integrated with their payment processing infrastructure, and would only require specifying a small amount of additional data (e.g. a “basic” price that they would have charged absent price discrimination, perhaps a marginal cost, and a few other details). This would also be built by the private sector.

Last-year’s income is not a great proxy for being cash-strapped, which is what we really want to estimate. I’m not sure how great a proxy you can actually construct using tax info. It seems like you can probably make a pretty good one by using a few years of income, looking at capital gains, and considering dependency status. Ideally the authorities would offer a wide range of possible certifications, and the market would decide which combinations were most useful for price discrimination. The incentives of the sellers and middlefolk seem to be basically aligned with social welfare, though I might be overlooking a bunch of details.

All of those services might take time to built up, and they might never be built at all. But if it takes a while or never gets done, it’s not a really big deal.

The IRS’ role in the proposal would hopefully be offensively simple. A minimal implementation might be: you can receive a special code by the same channel that you receive your tax refunds. By providing this code + your SSN/TIN at a government portal, you can make requests for verifiable certificates. These certificates are signed by the government, and specify your identifying information (or whatever subset you request) along with the requested claims about your income, dependency status, etc.

The entire thing could be much easier if all of the data about income was simply published where anyone could see it, and sellers could use it to set prices without any coordination with buyers. I have a feeling that would be a deeply and inherently problematic proposal though. (And that the mere problem of people losing their codes due to phishing attacks will already be enough to scare everyone away.)

(Warning: these numbers are pretty made up. Please feel free to criticize them.)

If the total value per consumer is $30/year, that’s basically not enough to justify forcing people to have to think about one extra thing. I could be really underestimating the total value on the table. Really I would need to have way more insight into the actual situation of low-income consumers in order to really estimate the value up for grabs, this kind of Fermi estimate is totally irresponsible. Given how messy life is, it seems more likely that I’m overestimating the goodness than that I’m underestimating it.

To be clear, I still think this is relatively robust and is overall more promising than most of the wacky  institutions proposed on the internet. It’s just not something that should be seriously compared to e.g. raising tolls on the bay bridge, which I think would probably make the world substantially better.

I think it would be nice if the world had more price discrimination; we would produce more goods, and those goods would be available to more people. As a society we could enable price discrimination by providing more high-quality signals to be used by price discriminators. The IRS is in a particularly attractive position to offer such signals since income is a particularly useful signal. But realistically I think that such a proposal would require coordination in order to get consumers’ consent to make the data available (and to ensure that only upper bounds were available);  the total gains are probably not large enough to justify the amount of coordination and complexity that is required.

9 thoughts on “The best kind of discrimination”